Still, those of us who are there are not letting that dampen the atmosphere – here’s a nice long post at The Midnight Bell. Can’t work out which bit to quote, maybe this bit, cos it starts with the main thing I’m wondering about right now, then moves on to something I hadn’t really thought that much about:

So, you’re a classic, but not much more than one at the moment, and that bothers me. You’re in the canon, but there are no festivities, no seasons of your works, no big articles in which a minor novelist or thoughtful actor tries to sell you to an indifferent public.

I don’t get it. You’re dynamite, a poet who absolutely answers to us. You know how we’re all middle class now? (HA! RIGHT!) You’re the pre-eminent English poet of the middle class, & I don’t mean how-the-middle-class-sees-themselves, because if you were you’d be popular, I mean you are the great artist of the urban bourgeoisie, the revolutionary class that Marx told us to learn from, the one that took over and transformed the world, 1688-1900, who built the hegemon we’re trapped in; you’re their/our artist (not a laureate, not telling us what we want to hear) because you are all about the doubts, the terror, the one who gets how everything is collapsing even as it is being built, the contingency of it all, Clive of India about to get a bullet through his skull in a card game, Prince Hohenstiel-Schwangau, a tyrant of compromise and laodicean cowardice… 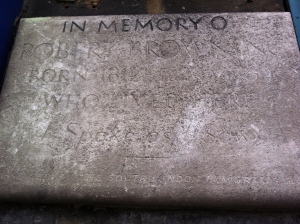 Happy Birthday, Robert. Even the memorials are fading. It’s almost invisibly located next to a fried chicken shop, under a junction box.

And NOTHING in the papers, apart from an okay-ish I guess bit in The Scotsman, [EDIT: to be fair, that Scotsman piece is considerably better than ‘okay-ish I guess’, esp considering the lack of anything else] and some weird aside in The Guardian that the browning variations nails here. And another bit in the Guardian, which seems on the face of it a little more sensible, but in fact barely manages to say a single thing that’s true or pertinent to Browning.

“Browning is not flashy and highly coloured, like Dickens .. But he was a great poet, and his ordinary bravery makes him a hero for all time.”

I mean seriously, what the fuck is that? No, he is, he is both of those things. He is fireworks! What the hell’s that last bit? What the fuck does it mean?

I’m glad that you like him and everything, Margaret, I really am – cos no one else is writing about Browning – but what exactly do you like him for? DON’T say his ‘ordinary bravery’ or i will vomit ALL OVER YOU.

And to echo TBV – Is that all we get?

How Do I Shot Sordello? Book II

I read Book II last week, but didn’t have time to write anything. It was one of those weeks where sportive gods shy what shit they can your way. I’m going to have to refer to my more or less haphazard notes and riff on them as I see fit.